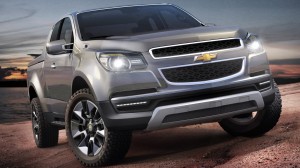 “Tacoma is the volume leader. We know that there’s a buyer for a really good Chevrolet lifestyle sport truck that’s quite different than the Tacoma.” Different how? Reuss and his colleagues won’t say. But, having seen the Asian-market Colorado, we’re not expecting any dramatic differences between it and the truck Chevy sells here. The U.S.-market Colorado will still be a body-on-frame affair, after all. And we already know what it looks like, inside and out.

It’s possible Reuss brought up the Tacoma simply in reference to the Colorado being extremely capable in addition to it competing in the mid-size truck segment. Although “mid-size” is relative—Reuss says the Colorado will be something like 90 to 95 percent of the size of a Silverado. (Full specs for the Colorado, even in overseas markets, haven’t yet been released.)

There also could be a GMC version, Reuss says. That seems like a no-brainer, but GM isn’t confirming anything at this point. If it does happen, we’re told that the GMC will be significantly differentiated from the Chevy version. We’re not sure how this could mean much more than a different fascia—a truck is a truck, after all—but we would like to see what the General’s stylists have in store.

In discussing the Colorado, Reuss also referred to fuel efficiency and a “powertrain change” versus the Silverado. We figure this probably just means the Colorado packs a four- or six-cylinder engine, but a diesel unit is a possibility. The company recently announced plans to offer the Chevy Cruze with a diesel four in 2013, and the Colorado is sold in most parts of Asia exclusively with two diesel V-6 engines.

Even though GM has confirmed that yes, the Colorado will be built and sold here, it isn’t talking timing yet. We expect an appearance in the next year, though.