Shares of Ford (F) are up nearly 3% today after reporting strong sales for the year and December. One encouraging aspect of the report was the strength in its F-series trucks, which are among the company’s most profitable vehicles. The F-Series is also considered by many to be an indicator of strength in the small business sector, as small business owners make up a large portion of the overall buyers of the vehicle.

As shown in the chart below, sales of F-Series pickups rose 11% during the year following last year’s growth of 28%. Believe it or not, this was the first back to back double digit annual increase since 1995, and it now puts total sales at nearly the same level they were at back in 2007. Granted, sales of F-Series trucks are still down 38% from their highs in 2004, but that was also the year when the housing bubble was at its peak. 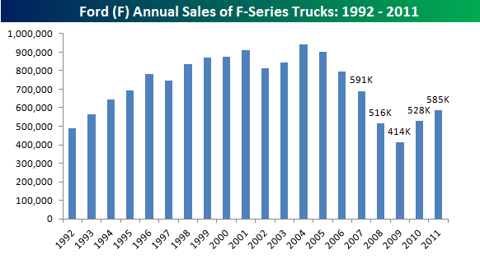