Ford Motor Co.’s gamble that consumers would embrace a fuel-efficient V-6 in their F-150 full-size pickup hit a milestone Wednesday with confirmation that 100,000 trucks with the smaller EcoBoost engine have been sold th 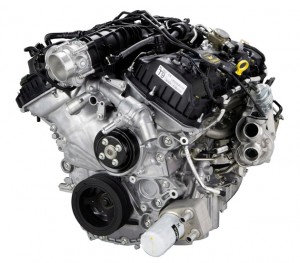 The last time Ford sold that many pickups with a V-6 was in 1985, according to Doug Scott, group marketing manager for F-Series trucks.

In recent months, about 40 percent of F-150 buyers have been paying an $895 premium for a turbocharged, direct-injection 3.5-liter V-6 that was designed to deliver the power of a V-8 but fuel efficiency of a V-6.

Ford also offers the truck with a conventional 3.7-liter V-6.

The first pickups with the EcoBoost V-6 were sold in late February. The take-rate hit 40 percent by May and has remained that high ever since.

Demand prompted Ford to increase production a couple months ago of the truck with the EcoBoost engine.

Total sales of the pickup with one of the two V-6s offered are more than half of all the trucks sold.

Ford makes the F-150 at the Dearborn Truck and Kansas City assembly plants.