All Tacoma T|X Baja Series models will be built exclusively at Toyota Motor Manufacturing, Texas (TMMTX) in San Antonio and are scheduled for launch in late spring 2012.

“The Tacoma has long been the sales leader by a wide margin in the compact pickup segment thanks to its well-earned reputation for stellar quality, durability, reliability and off-road capability,” said Bob Carter, group vice president and general manager, Toyota Division. 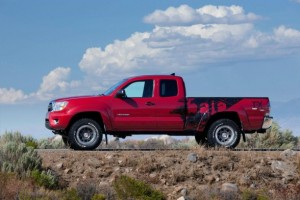 Toyota has a rich Baja racing truck heritage that dates back nearly three decades and includes numerous titles at the legendary Baja 500 and 1000. Toyota’s desert racing program has inspired the development of numerous TRD off-road focused products and packages over the years including the Tacoma PreRunner and TRD Off-Road packages for both Tacoma and Tundra. Last year, Tacoma’s Off-Road Package was enhanced with the launch of the TRD T|X and T|X Pro packages. TRD now takes Tacoma off-roading to the next level with the development of the T|X Baja Series.

The front suspension has been upgraded to include 60mm piston Bilstein race shocks with TRD coil springs that feature a protective zinc plated body and a one inch increase in wheel travel. The rear suspension is equipped with 50mm piston Bilstein race shocks with a remote reservoir to increase shock oil capacity for greater heat dissipation and damping sensitivity. The rear shocks also include a zinc-plated body and a 1.5-inch increase in wheel travel. Additional information about the Baja Series, including pricing and ordering information will be available in early 2012.

The T|X Baja Series will be part of a 2012 Tacoma line that is updated with a restyled front end and a refreshed interior in all models. Exterior changes include a redesigned hood, grille, headlamps and front bumper, among other changes. Inside, Tacoma has a new center-instrument panel design with a revised gauge cluster, along with a new steering wheel. A redesigned center stack adds new air conditioner/heater controls and power point locations.